Flight isn’t easy at the edge of space. But tiny “microfliers” could soar high in Earth’s atmosphere fueled only by sunlight, experiments suggest.

At heights between about 50 and 80 kilometers above Earth’s surface, in what’s known as the mesosphere, the atmosphere is so thin that airplanes and balloons can’t stay aloft. But mechanical engineer Mohsen Azadi and colleagues at the University of Pennsylvania saw promise in a technique that uses light to levitate objects. The researchers cut disks of transparent Mylar 6 millimeters in diameter and coated the bottom sides with carbon nanotubes. When heated by light, the tiny aircraft floated inside a vacuum chamber with a pressure that mimicked the mesosphere, the researchers report February 12 in Science Advances.

Carbon nanotubes are key for the microfliers to achieve liftoff. The nanotubes absorb light, warming the flier. Air molecules gain energy when they collide with the warmed flier, ricocheting away from it at higher speeds. The molecules gain extra oomph from striking the carbon nanotubes on the bottom of the craft. That’s thanks to the material’s nooks and crannies: Air molecules collide multiple times with the nanotubes, getting even warmer and gaining more energy than those that strike the top. That extra energy translates to speedier molecules. As a result, air molecules ricochet away from the bottom of the microflier faster than from the top, generating lift.

Microfliers could run on sunlight or laser light and could someday carry small instruments to measure conditions in the relatively unexplored mesosphere, the researchers suggest. 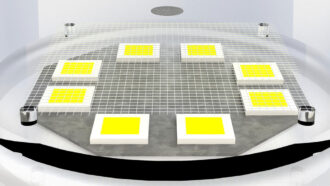 A year ago, we asked 6 questions about COVID-19. Here’s how the answers evolved

OXO Is Having a Major Cyber Monday Sale on This Sleek, Editor-Approved Coffee Maker

Tiger Woods will address the media on Tuesday ahead of the Hero World Challenge. Woods’ news conference, scheduled for 9