The world wasted about 931 million metric tons of food in 2019 — an average of 121 kilograms per person. That’s about 17 percent of all food that was available to consumers that year, a new United Nations report estimates.

“Throwing away food de facto means throwing away the resources that went into its production,” said Martina Otto, who leads the U.N. Environment Program’s work on cities, during a news conference. “If food waste ends up in landfills, it does not feed people, but it does feed climate change.”

Some 690 million people are impacted by hunger each year, and over 3 billion people can’t afford a healthy diet. Meanwhile, lost and wasted food accounts for 8 to 10 percent of global greenhouse gas emissions. Reducing food waste could ease both of those problems, according to the Food Waste Index Report 2021 published March 4 by the U.N. Environment Program and WRAP, an environmental charity based in the United Kingdom.

Researchers analyzed food waste data from 54 countries. Most waste — 61 percent — came from homes. Food services such as restaurants accounted for 26 percent of global food waste while retail outlets such as supermarkets contributed just 13 percent. Surprisingly, food waste was a substantial problem for nearly all countries regardless of their income level, the team found. “We thought waste was predominantly a problem in rich countries,” Otto said.

While the report is the most comprehensive analysis of global food waste to date, several knowledge gaps remain. The 54 countries account for just 75 percent of the world’s population, and only 23 countries provided waste estimates for their food service or retail sectors. The researchers accounted for these gaps by extrapolating values for the rest of the world from countries that did track these data. The report does not differentiate between potentially edible wasted food and inedible waste such as eggshells or bones.

Otto recommends that countries begin addressing food waste by integrating reduction into their climate strategies and COVID-19 recovery plans. “Food waste has been largely overlooked in national climate strategies,” Otto said. “We know what to do, and we can take action quickly — collectively and individually.” 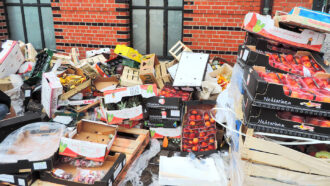