The oldest DNA ever recovered from an animal is adding new chapters to mammoth life history, going back more than 1 million years.

Genetic material from ancient mammoth molars found in Siberia handily beats the previous record set by 700,000-year-old DNA from a frozen, fossilized horse (SN: 6/26/13). Some mammoth gene snippets suggest that ancient mammoths already had the traits that allowed them to withstand cold temperatures during later ice ages. What’s more, some hairy behemoths that inhabited North America may have been a hybrid mix between the woolly mammoth and a previously unknown mammoth species, researchers report February 17 in Nature.

The findings “really highlight the exciting times that we live in,” says Charlotte Lindqvist, an evolutionary biologist at the University at Buffalo in New York who was not involved in the work. “We can get genetic data — we can recover DNA — from such ancient samples that can directly give us windows into the past.” Such data can reveal how extinct animals evolved, adding to the clues that come from physically examining ancient bones.

The mammoth DNA was extracted from three molars unearthed in the 1970s from permafrost in northeast Siberia. Though DNA degrades into shorter strings of genetic material over time, making it difficult to handle and piece together, cold permafrost helps to protect genetic information from rapidly falling apart. Theoretical studies had suggested that researchers could perhaps recover DNA that is more than 1 million years old. Still, the recovered DNA is “quite close to the limit of what is possible,” says Love Dalén, an evolutionary geneticist at the Centre for Palaeogenetics in Stockholm.

The two oldest specimens, dubbed Krestovka and Adycha, lived around 1.2 million to 1 million years ago, Dalén and colleagues found. The third, called Chukochya, dates back 800,000 to 500,000 years. Genetic analyses of ancient DNA recovered from these specimens — as well as DNA from other mammoths and present-day elephants — suggest that Krestovka and Adycha belonged to two different mammoth species. Researchers had previously thought that only one type of mammoth, called the steppe mammoth (Mammuthus trogontherii), lived in Siberia 1 million years ago.

While Adycha was part of the steppe mammoth lineage that eventually gave rise to woolly mammoths, the Krestovka mammoth may have diverged from its relatives more than 2 million years ago and could represent an unknown line of mammoths, the researchers found. That unidentified species might have mixed with woolly mammoths to give rise to the Columbian mammoth (M. columbi) — which roamed North America — at least 420,000 years ago. The younger Chukochya may have been an early woolly mammoth (M. primigenius).

The study adds to the amount of mammoth genetic material researchers have decoded and expands the geographic range where such mammoth samples have come from, says Vincent Lynch, an evolutionary biologist at the University at Buffalo, who was not involved in the work. Analyzing the genetics of many mammoths from varied locations is “important if you want to make statements about how mammoths came to be mammoths, why they look the way they do and how diverse they were,” Lynch says.

Traits such as shaggy hair, which probably helped mammoths handle the cold, are ancient, the team found (SN: 7/2/15). The Adycha and Chukochya mammoths already had the genetic tweaks for many of these traits, hinting that the hairy animals adapted slowly to the chill of ice ages over hundreds of thousands of years. “A lot of the mutations which we think make mammoths mammoths — small ears, lots of fat, not sensitive to cold — happened before they got into that environment,” Lynch says.

Still, while the new results are intriguing, ancient DNA is fragile and there’s a limit to how much data researchers can get from old specimens, Lindqvist says. So the findings are unlikely to be the full story, she says. 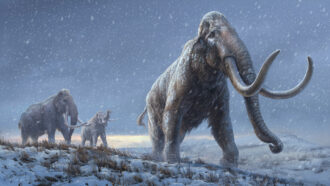 Yes, You Need to Dust and Clean Your Walls — Luckily, This Amazon Find Can Help

This Is the Secret to Getting the Fluffiest Baked Potato Ever

The Newest Girl Scout Cookie Flavor Is in Short Supply This Season, So Stock Up If You Can

The USGA, Masters Tournament and PGA of America announced Tuesday that registration for 2022-23 Drive, Chip and Putt qualifying is

Yearning for the Colors of My Garden

Looking back at warmer timesRead More