The first black hole ever discovered still has a few surprises in store.

New observations of the black hole–star pair called Cygnus X-1 indicate that the black hole weighs about 21 times as much as the sun — nearly 1.5 times heavier than past estimates. The updated mass has astronomers rethinking how some black hole–forming stars evolve. For a star-sized, or stellar, black hole that massive to exist in the Milky Way, its parent star must have shed less mass through stellar winds than expected, researchers report online February 18 in Science.

Knowing how much mass stars lose through stellar winds over their lifetimes is important for understanding how these stars enrich their surroundings with heavy elements. It’s also key to understanding the masses and compositions of those stars when they explode and leave behind black holes.

The updated mass measurement of Cygnus X-1 is “a big change to an old favorite,” says Tana Joseph, an astronomer at the University of Amsterdam not involved in the work. Stephen Hawking famously bet physicist Kip Thorne that the Cygnus X-1 system, discovered in 1964, did not include a black hole — and conceded the wager in 1990, when scientists had broadly accepted that Cygnus X-1 contained the first known black hole in the universe (SN: 4/10/19).

Astronomers got a new look at Cygnus X-1 using the Very Long Baseline Array, or VLBA. This network of 10 radio dishes stretches across the United States, from Hawaii to the Virgin Islands, collectively forming a continent-sized radio dish. In 2016, the VLBA tracked radio-bright jets of material spewing out of Cygnus X-1’s black hole for six days (the time it took for the black hole and its companion star to orbit each other once). Those observations offered a clear view of how the black hole’s position in space shifted over the course of its orbit. That, in turn, helped researchers refine the estimated distance to Cygnus X-1.

The new observations suggest that Cygnus X-1 is about 7,200 light-years from Earth, rather than the previous estimate of about 6,000 light-years. This implies that the star in Cygnus X-1 is even brighter, and therefore bigger, than astronomers thought. The star weighs about 40.6 suns, the researchers estimate. The black hole must also be more massive in order to explain its gravitational tug on such a massive star. The black hole weighs about 21.2 suns — much heftier than its previously estimated 14.8 solar masses, the scientists say.

The new mass measurement for Cygnus X-1’s black hole is so big that it challenges astronomers’ understanding of the massive stars that collapse to form black holes, says study coauthor Ilya Mandel, an astrophysicist at Monash University in Melbourne, Australia.

“Sometimes stars are born with quite high masses — there are observations of stars being born with masses of well over 100 solar masses,” Mandel says. But such enormous stars are thought to shed much of their weight through stellar winds before turning into black holes. The bigger the star and the more heavy elements it contains, the stronger its stellar winds. So in heavy element–rich galaxies such as the Milky Way, big stars — no matter their starting mass — are supposed to shrink down to about 15 solar masses before collapsing into black holes.

The LIGO and Virgo gravitational wave detectors have discovered black holes weighing tens of solar masses in other galaxies (SN: 1/21/21). But that is probably because LIGO peers at distant galaxies that existed earlier in the universe, Joseph says. Back then, fewer heavy elements existed, so stellar winds were weaker. With the new Cygnus X-1 measurement, “now we have to say, hang on, we’re in a [heavy element]–rich environment compared to the early universe … but we still managed to make this really massive black hole,” she says, “so maybe we’re not losing as much mass through stellar winds as we initially thought.” 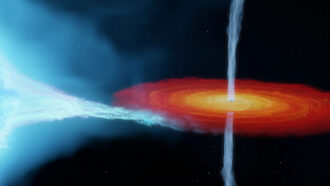 Tadic: Zidane was my hero

A music therapist seeks to tap into long-lost memories

The Contest-Winning Caesar Dressing My Husband Is Known For

How to Overwinter Tender Plants in the Northern Plains