Most professional athletes who got COVID-19 didn’t suffer heart damage from it, a new study suggests.

Researchers screened 789 players who had tested positive for SARS-CoV-2 infections for signs of myocarditis or pericarditis — inflammation of the heart or its surrounding sac. Only five of those athletes (0.6 percent) had evidence of the inflammatory heart conditions and were restricted from play for at least three months to give their hearts time to heal, researchers report March 4 in JAMA Cardiology. Those results contrast with findings from previous studies of college athletes, which suggested that as many as 15 percent of young athletes may have developed the potentially deadly heart conditions after a coronavirus infection (SN: 9/11/20).

Particularly for asymptomatically infected players, “we’re not seeing a lot of cardiac injury as it relates to COVID,” says study coauthor Jonathan Kim, chief of sports cardiology at Emory University School of Medicine in Atlanta. None of the 329 players who were asymptomatic or had very mild symptoms showed signs of heart damage. The five athletes who were held back from play had moderate symptoms of COVID-19, such as dry cough, loss of smell and taste and fatigue. Previous research has shown that myocarditis is a condition that plagues people who have had more serious cases of coronavirus disease. That suggests it is important to consider the severity of COVID-19 symptoms when deciding whether to screen both athletes and non-athletes for heart inflammation, Kim says.

All of the student athletes in the earlier study had their hearts examined with magnetic resonance imaging, or MRI, regardless of whether the athletes were asymptomatic or had COVID-19 symptoms. The researchers also conducted other tests to identify signs of inflammation. Besides the heart images, most of the college athletes had no other indication of heart inflammation, says Meagan Wasfy, a sports cardiologist at Massachusetts General Hospital in Boston who was not involved in either study. Because the other test results didn’t consistently match the MRI results, “we don’t know the clinical import of those findings.” People’s hearts, especially athletes’ hearts haven’t been widely screened with MRIs to know what’s normal and what is a true indication of heart damage from viral illnesses, she says.

What may look like myocarditis in an MRI of an athlete’s heart may be a common adaptation to sport or sustained vigorous exercise, says Sawalla Guseh, a cardiologist also at Massachusetts General Hospital.

See all our coverage of the coronavirus outbreak

The new study in pro athletes evaluated their hearts with three tests to detect inflammation before moving on to MRIs. Players from the professional sports leagues for men’s soccer, baseball, ice hockey, football and men’s and women’s basketball were given blood tests for troponin — a heart muscle protein that can signal heart damage when found in the blood — electrocardiographs, which trace electrical signals from the heart, and echocardiographs, which use ultrasound to examine the heart. Of the nearly 800 players with coronavirus infections, 30 had concerning results from one or more of those tests. Only the players with the abnormal results went on to get MRIs, which winnowed the list down to the five players who had to sit out for a while.

“This paints a more reassuring picture than the prior MRI work,” Wasfy says.

Results from this study may be hard to apply to the general public because of different ages, fitness levels and differing degrees of disease severity of the average person compared with pro athletes.

The findings do suggest that people — even young healthy ones — need to take COVID-19 seriously and rest when they’re sick to protect their hearts, gradually returning to activity after they have recovered. “Be honest with yourself about your symptoms,” Guseh says. Tightness in the chest, shortness of breath and extreme fatigue after exertion are symptoms of both COVID-19 and heart inflammation.

“For the individual person the risk seems low” for developing heart damage from the coronavirus, he says. But considering the millions of people who have contracted the virus, “even if it’s 1 percent or half a percent that’s still a substantial number of people.” 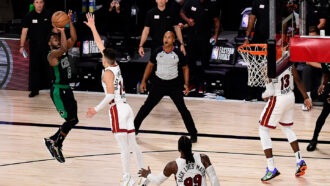 The 8 Best Splurges We Made for Our Kitchens in 2021

5 Things You Should Never Do When Cleaning Your Coffee Machine

Before & After: A 1967 Ranch Gets a Mid-Century-Style Kitchen and Dining Room

Allisen Corpuz had one goal in mind Sunday at LPGA Q-Series: advance. “I came into the day trying to shoot

The beauty of the end of a seasonRead More

How to Make a Nordic Tree for the Holidays

What Is Washing Soda and How Is It Used?

GPOD on the Road: Hatley Castle

How to Clean a Computer Screen