An ocean’s worth of water may be lurking in minerals below Mars’ surface, which could help explain why the Red Planet dried up.

Once home to lakes and rivers, Mars is now a frigid desert (SN: 12/8/14). Scientists have typically blamed that on Mars’ water wafting out of the planet’s atmosphere into space (SN: 11/12/20). But measurements of atmospheric water loss made by spacecraft like NASA’s MAVEN orbiter are not enough to account for all of Mars’ missing water — which was once so abundant it could have covered the whole planet in a sea up to 1,500 meters deep. That’s more than half the volume of the Atlantic Ocean.

Computer simulations of water moving through Mars’ interior, surface and atmosphere now suggest that most of the Red Planet’s water molecules may have gotten lodged inside the crystal structures of minerals in the planet’s crust, researchers report online March 16 in Science.

The finding “helps bring focus to a really important mechanism for water loss on Mars,” says Kirsten Siebach, a planetary geologist at Rice University in Houston who was not involved in the work. “Water getting locked up in crustal minerals may be equally important as water loss to space and could potentially be more important.”

Planetary scientist Eva Scheller of Caltech and colleagues simulated possible scenarios for water loss on Mars, based on observations of the Red Planet made by rovers and orbiting spacecraft, and lab analyses of Martian meteorites. These simulations accounted for possible water loss to space and into the planet’s crust through bodies of water or groundwater interacting with rock.

In order for the simulations to match how much water was on Mars 4 billion years ago, how much is left in polar ice caps today and the observed abundance of hydrogen in Mars’ atmosphere, 30 to 99 percent of Mars’ ancient water must be stashed away inside its crust. The rest was lost to space.

Water gets locked inside minerals on Earth, too, says Scheller, who presented the results March 16 in a news conference at the virtual Lunar and Planetary Science Conference. But unlike on Mars, that underground water is eventually belched back out into the atmosphere by volcanoes. That difference is important for understanding why one rocky planet may be lush and wet and habitable, while another is an arid wasteland.

Mars’ underground water could be mined by future explorers, says Jack Mustard, a planetary geologist at Brown University in Providence, R.I., not involved in the work. The most easily accessible water on Mars may be at its polar ice caps (SN: 9/28/20). But “to get the ice, you’ve got to go up to [high latitudes] — kind of cold, harder to live there,” Mustard says. If water can be extracted from minerals, it could support human colonies at warmer climes closer to the equator. 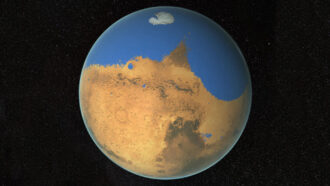 The Blue-tongued Skink Has a Heart of Gold

Brazil's prince and king of '58

6 Backyard Accessories That Are on Their Way Out, According to Real Estate Agents

Ready to Finally Get Organized? These Are the 5 Common Mistakes You Should Avoid.

7 Surprising Things You Didn’t Know About Your Grill Grates

TULSA, Okla. – Brooks Koepka didn’t have a detailed explanation for why he played his first nine holes in 5