Cotton plants native to Mexico’s Yucatan Peninsula may all look the same — unkempt and untamed bushes with flowers that shift from pale yellow to violet as pollinators visit them. But genes that have escaped from genetically modified cotton crops have made some of these native plants fundamentally different, changing their biology and the way they interact with insects.

“These are profoundly interesting effects,” says Norman Ellstrand, an evolutionary biologist at the University of California, Riverside. “It’s the first case that really suggests that a whole ecosystem can be disrupted” after transgenes enter a wild population.

The results challenge one long-held view that when genes from genetically modified crops escape into the wild, they have only a neutral effect on wild plants or pass on their benefits to weeds, says Alicia Mastretta Yanes, a plant molecular ecologist at the National Commission for the Knowledge and Use of Biodiversity in Mexico City. The findings confirm that unexpected outcomes of this genetic transfer, some of which “were never imagined, or at least were not assumed as possible,” do happen sometimes, she says.

Scientists have previously tried to explain what happens after DNA from genetically modified crops ends up in their wild relatives (SN: 1/29/16). But the majority of studies have been done under carefully controlled conditions, and very few have tested the consequences, if any, of these gene transfers on natural ecosystems.

The scarce evidence motivated Ana Wegier, a plant geneticist from the National Autonomous University of Mexico in Mexico City, and her students to find out. The country was their natural lab. The cotton we know (Gossypium hirsutum) first appeared and diversified between 2 million and 1.5 million years ago in Mexico, and native variants still sprout across the land. In the last 25 years, vast fields of fluffy genetically engineered cotton have also cropped up across the northern part of the country.

During that time, Wegier has explored Mexico searching for wild cotton, only to find it at the edge of cliffs, municipal dumps or the middle of a highway. Wild cotton likes to grow in the most inhospitable locations, where it does not have to compete with other species, she says. In 2018, Wegier and her group traveled to the Ría Lagartos biosphere reserve, an isolated coastal area in the Yucatan Peninsula. With the whitest beaches just a few feet away, the researchers spent long days observing and sampling cotton plants under the scorching sun as swarms of mosquitoes bit them nonstop.

Back in Wegier’s city lab, the team extracted DNA from the 61 plants it had collected and found that 24 of the plants did not have any transgenes. Twenty-one plants had a transgene that conferred resistance to the herbicide glyphosate; seven could now produce a lethal toxin that kills destructive insects; and the remaining nine had incorporated both escaped genes into their genetic code.

With the closest fields of genetically engineered cotton nearly 2,000 kilometers away, “what surprised me the most was how easy it was to find changes where we didn’t expect them,” Wegier says.

When slathered in a stress-inducing chemical, the plants with glyphosate resistance produced a lot less nectar than wild plants. The nectar is a sugary snack that wild cotton secretes whenever it’s eaten in exchange for the bodyguard services of particularly aggressive ant species. These plants were also the ones that looked the most ragged before the samples were taken. With no tasty reward to offer, and no ants to protect the cotton from hungry herbivores, these plants suffered the most damage compared with native plants that didn’t have the transgene.

Treated with the same chemical, the plants with the insecticide gene exuded nectar all the time, secreting more than the wild plants with no escaped genes and becoming an irresistible beacon to protective ants. But in the researchers’ sample of plants, there weren’t as many with the insecticide gene, suggesting that either the ants or the transgene itself were scaring off other insects. That may have interfered with the pollination of the cotton’s flowers, preventing the plant from reproducing.

The findings are intriguing, says Hugo Perales, an agroecologist at the Colegio de la Frontera Sur in Chiapas, Mexico, but he urges for caution. The uncontrollable, real-world environment of Ría Lagartos forced the researchers to work with a very small number of plants, he says. “There’s a suggestion that something is happening, but this suggestion needs to be verified.”

To Wegier, the implications of the study are clear. With Mexico being the reservoir of cotton’s genetic diversity, she argues it would be wise to limit the introduction of more genetically modified variants. “We know the presence of transgenes is irreversible, and the [ecological] effects are irreversible,” she says. 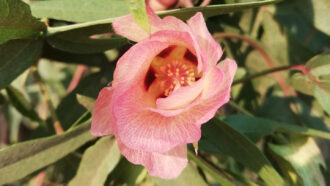 Why Don’t Manx Cats Have Tails?

The Contest-Winning Caesar Dressing My Husband Is Known For

How to Overwinter Tender Plants in the Northern Plains