Normally, it takes the ghostly light of the full moon to coax certain worms from hiding on the seafloor to mate. Out in the open, sex-inducing chemicals kick off a swirling dance that culminates in a moonlit shower of eggs and sperm.

But just a whiff of cone snail venom might also get the worms in the mood.

Conus imperialis venom contains two molecules that mimic bristle worm pheromones and can stimulate mating behaviors, researchers report March 12 in Science Advances. The find raises the possibility that the cone snails are “weaponizing the worms’ own pheromone as a sort of lure,”says Joshua Torres, a medicinal chemist at the University of Copenhagen. “It’s really wild.”

Cone snails pack their potent venom into self-made harpoons, which they then fling into fish, mollusks or worms. The venom of each of the more than 700 cone snail species is a treasure trove of chemicals that hijack specific physiological pathways in their prey. For example, one cone snail species produces its own fish insulin that saps prey’s blood sugar, making a lethargic target. (SN: 1/19/15).

The venom’s specificity of action has attracted drug researchers looking for inspiration. A morphinelike painkiller called Prialt, for example, stemmed from cone snails. Torres and his colleagues were keen to scour the venom of C. imperialis, a cosmopolitan species that hunts worms, for possible drugs. Chemical analysis revealed two compounds — Conazolium A and genuanine — that piqued the researchers’ interest.

To Torres’ surprise, these small molecules didn’t seem to target neuromuscular pathways and impair their function, like many venom constituents. But the molecules were remarkably similar to some bristle worm’s mating pheromones. Chemically, the snail’s mimics are actually more stable than the worm’s natural pheromones, which degrade relatively quickly after release, Torres says. The match seemed too perfect to be coincidental.

While venom usually does its dirty work via injection, there are some examples of cone snails releasing chemicals into the water column. To test the lure hypothesis, the researchers exposed Platynereis dumerilii worms in petri dishes to the pheromone mimics and watched. When hit with the snail chemicals, 13 of 16 males in the experiment released sperm, and seven of 11 females began swirling around in tight circles — a precursor to mating. While C. imperialis isn’t known to eat this specific worm, the researchers found the DNA of close relatives in the guts of some snails, suggesting that the compounds could be used against more common prey, such as fireworms.

“Cone snails are full of surprises, and this paper raises an exciting possibility,” says Thomas Duda, a zoologist and evolutionary biologist at the University of Michigan in Ann Arbor who wasn’t involved in the study. “The next step needs to be figuring out how this actually works in nature.”

C. imperialis’ hunting behavior is mostly known from laboratory studies, where the worms are sitting ducks for snails, Torres says. In the wild, however, the worms spend time hidden below sediment and under crevices. Observations in more natural settings could confirm whether C. imperialis’ specialized venom entices worms with the promise of a mate, only to become a meal. 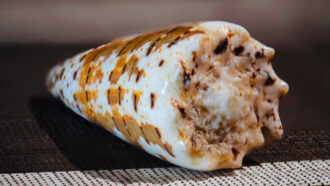 Chavarria: Getting to a World Cup would be beautiful for all Nicaraguans