A whiff of catnip can make mosquitoes buzz off, and now researchers know why.

The active component of catnip (Nepeta cataria) repels insects by triggering a chemical receptor that spurs sensations such as pain or itch, researchers report March 4 in Current Biology. The sensor, dubbed TRPA1, is common in animals — from flatworms to people — and responds to environmental irritants such as cold, heat, wasabi and tear gas. When irritants come into contact with TRPA1, the reaction can make people cough or an insect flee.

Catnip’s repellent effect on insects — and its euphoric effect on felines — has been documented for millennia. Studies have shown that catnip may be as effective as the widely used synthetic repellent diethyl-m-toluamide, or DEET (SN: 9/5/01). But it was unknown how the plant repelled insects.

So Marco Gallio, a neuroscientist at Northwestern University in Evanston, Ill., and his colleagues exposed mosquitoes and fruit flies to catnip and monitored the insects’ behavior. Fruit flies were less likely to lay eggs on the side of a petri dish that was treated with catnip or its active component, nepetalactone. Mosquitoes were also less likely to take blood from a human hand coated with catnip. Insects that had been genetically modified to lack TRPA1, however, had no aversion to the plant. That behavior — coupled with experiments in lab-grown cells that show catnip activates TRPA1 — suggests that insect TRPA1 senses catnip as an irritant.

Puzzling out how the plant deters insects could help researchers design potent repellents that may be easier to obtain in developing countries hit hard by mosquito-borne diseases. “Oil extracted from the plant or the plant itself could be a great starting point,” Gallio says.

If a plant can make a chemical that activates TRPA1 in a variety of animals, none are going to eat it, says Paul Garrity, a neuroscientist at Brandeis University in Waltham, Mass., who was not involved in the work. Catnip probably didn’t evolve in response to predation from ancient mosquitoes or fruit flies, he says, since plants aren’t on the insects’ main menu. Instead, these insects might be collateral damage in catnip’s fight with some other plant-nibbling insect.

The finding “does make you wonder what the target is in cats,” says Craig Montell, a neuroscientist at the University of California, Santa Barbara also not involved with the study. The question is not only whether catnip targets TRPA1 in cats but also whether the plant might send signals through different cells — such as those for pleasure — in the feline nervous system, Montell says.

Luckily, the plant’s bug-off nature doesn’t affect people — a sign of a good repellent, Gallio says. Human TRPA1 did not respond to catnip in lab-grown cells. Plus, he says, “the great advantage is that you can grow [catnip] in your backyard.”

Though maybe don’t plant catnip in the garden, says study coauthor Marcus Stensmyr, a neuroscientist at Lund University in Sweden. A pot might be better, he says, since catnip can spread like a weed, taking over a garden. 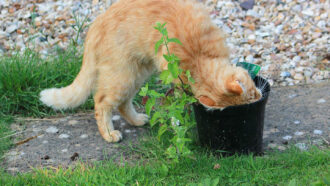 The Voracious Spotted Lanternfly Is Invading the Eastern U.S.

Everything you need for summer cooking, cleaning, and entertaining. READ MORE…Read More

Kim Kardashian is Beyond Meat’s New Chief Taste Consultant and Honestly, It Makes So Much Sense

How Long Can You Leave Cooked Foods Unrefrigerated?

This Method for Cooking Steak Goes Against Everything You’ve Known, But the Results Are Totally Worth It

I’m a Private Chef and I Use This $20 Amazon Find Constantly (Bonus: It’s on Sale!)

It was dominant, then it was close, and then it was over: Stanford is the winner of the NCAA DI

After Day 1 loss at BOH Match Play, Danielle Kang (back) ‘not ready to play’

8 Types of Pollinators that Visit the Garden

Some of these may surprise you!Read More