One of the earliest known hominids, a 4.4-million-year-old partial skeleton of a female dubbed Ardi, had hands suited for climbing trees and swinging from branches, a new investigation suggests.

These results, based on statistical comparisons of hand bones from fossil hominids and present-day primates, stoke an ongoing debate not only about how Ardi moved (SN: 2/22/19) but also what the last common ancestor of humans and chimps looked like (SN: 12/31/09).

“The last common ancestor of humans and chimpanzees was more similar to chimps than to any other living primate,” says paleoanthropologist Thomas Prang of Texas A&M University in College Station. That ancestor, who lived roughly 7 million years ago, had hands designed much like those of tree-adept, knuckle-walking chimps and bonobos, he and his colleagues say. That hand design was retained by early hominids such as Ardi’s East African species, Ardipithecus ramidus, the team reports February 24 in Science Advances.

Not until after Lucy’s kind had died out did bonobos diverge into a species apart from chimps, between 1.6 million and 2 million years ago (SN: 10/27/16). That makes the older chimp lineage a closer relative of early hominids. Still, Prang cautions, chimps have evolved over the past several million years and don’t represent “living fossils” that can be used as stand-ins for the ancient ancestor of humans and chimps.

To assess which species possessed especially similar hands, Prang’s team analyzed the sizes and dimensions of four fossils from Ardi’s hands. The researchers then compared those measurements with comparable ones from other fossil hominids and from living primates.

Using the same statistical approach, Prang has previously argued that Ar. ramidus had a foot that most closely resembles those of present-day chimps and gorillas. If so, then Ardi and her compatriots, who were close in size to chimps, most likely split their time between walking on all fours and moving through trees, he argued April 2019 in eLife.

In stark contrast to Prang’s conclusions, paleoanthropologists who discovered and studied Ardi’s remains contend that Ar. ramidus was built neither like chimps nor humans (SN: 9/9/15).

Ardi’s finger bones look like those of chimps in some ways, says Morgan Chaney of Kent State University in Ohio. Chaney works with Kent State’s Owen Lovejoy, one of the scientists who originally studied Ardi’s remains. But the fossil female’s palm and forearm were much shorter than those of chimps, Chaney says. Combined with her distinctive wrists, her arms would have allowed only for grasping branches while moving slowly in trees.

Ardi’s forearm structure was not that of a knuckle-walker, Chaney contends.

Prang’s earlier analysis of Ardi’s feet also falls short of demonstrating a chimplike design, Chaney and colleagues argue January 10 in the Journal of Human Evolution. Ardi’s relatively long mid-foot, which is ill-suited to climbing, was not accounted for in Prang’s statistical analysis, the scientists say. Similarities in body mass between Ardi and chimps, rather than a close evolutionary relationship, at least partly explain the chimplike foot measurements that Prang cites.

Based on her overall body design, Ardi walked upright, Chaney and colleagues argue. She combined a long lower pelvis that stabilized a straight-legged stance with an apelike, opposable big toe. Ardi climbed trees cautiously and rarely hung or swung from branches, those researchers hold. 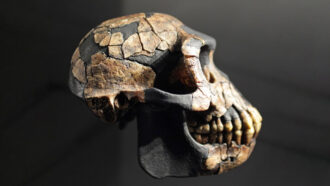 Why You Should Add a Carrot to Your Latke Frying Oil

Plus, five other brilliant latke tips from the author of Sababa, Adeena Sussman. READ MORE…Read More

Do I Have to Clean My Dishwasher? (And Is It Bad I Never Have?)

How To Make Puppy Chow (or Muddy Buddies)

Before & After: A Run-Down 1950s Kitchen Gets a DIY Cottage Makeover

Brooks Koepka delivers a beatdown on Bryson DeChambeau in ‘The Match’

Another day in a great gardenRead More

Autumn in the Blue Ridge Mountains